CLARENCE, NY (wbbz.tv) Chris Musial, Vice President and General Manager of WBBZ-TV, Your Hometown MeTV Station, is proud to announce that the station is the recipient of two awards in the 50th Annual Excellence in Broadcasting Awards Competition.

The station’s weekly bowling program “Beat The Champ” was recognized for “Best Coverage of a Sporting Event.” “Beat The Champ” is hosted by veteran sports broadcaster Paul Peck and Hall of Fame bowler Sue Nawojski every Saturday at 4p.m. (with an encore Sunday night at 11p.m.) showcasing hometown bowlers competing for a weekly prize trophy. 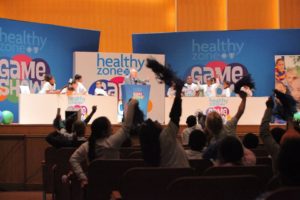 “The Healthy Zone Game Show,” produced in partnership with BlueCross BlueShield of Western New York, was honored as the “Best Program Designed for Children.” This show featured 3rd graders from Buffalo Public Schools in a test of all things healthy airing from November 2015 through April 2016. Three “Finals” episodes will air June 3rd through the 20th. 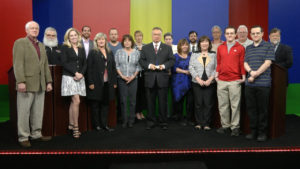 Chris Musial commented, “Everyone at WBBZ-TV is honored by this recognition. A panel of judges reviewed entries from legacy and independent stations across the state. This is a tough competition to win, and we are proud.”

Owner Phil Arno added, “This is a testament to the hometown team we have at WBBZ-TV, committed to producing the best, and most unique local programming in the market.”

“This is a great honor for Buffalo and local programming,” commented Julie R. Snyder, Vice President, Corporate Relations, BlueCross BlueShield of Western New York. “We are proud that our partnership with WBBZ has encouraged our community to take steps toward a healthier lifestyle while showcasing Buffalo Public School children in a fun and engaging activity.”

The New York State Broadcasters Association represents the interests of over 300 television and radio stations in the New York State Assembly, the United States Congress, and various other legislative bodies. More information can be found at www.nysbroadcasters.org

Catch the Hometown Fun From The Erie County Fair on “Bragging Rights” Weeknights at 8p.m. on WBBZ-TV!

Every Hometown Voice Is Heard On “Political Buzz”