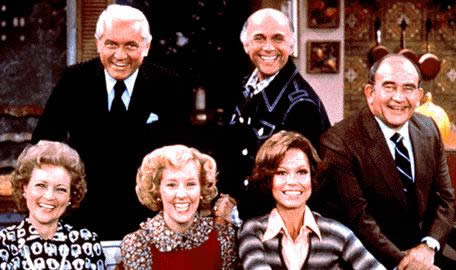 WITH 3 HOURS OF THE TV ICON’S MOST FAMOUS EPISODES

CHICAGO, IL / CLARENCE, NY (wbbz.tv) WBBZ-TV, Your Hometown MeTV Station, pays tribute to the career and comedy of trailblazer and TV icon Mary Tyler Moore with a special collection of Mary Tyler Moore episodes airing on Sunday, January 29 from 2:00 to 5:00pm ET. In honor of the famed comedienne and actress, who passed away January 25th at the age of 80, MeTV Remembers Mary Tyler Moore presents six of the most beloved and timeless episodes of her self-titled comedy series that aired from 1970 to 1977.

Known as the woman who “can turn the world on with her smile”, viewers are invited to tune in and enjoy the very first episode of Mary Tyler Moore beginning with “Love Is All Around” (season one), where Mary first gets her job at WJM-TV in Minneapolis and meets her neighbor Rhoda Morgenstern. “Put On A Happy Face” (season three), where Mary is nominated for The Teddy Awards, but is in rough shape to attend or, heaven forbid, to actually win. “The Dinner Party” (season four), where Mary throws a dinner party for exactly six people, despite her reputation for disastrous get togethers. “Chuckles Bites the Dust” (season six), station co-worker Chuckles The Clown dies, and his funeral service is anything but solemn. “Lou Dates Mary” (season seven), who says dating the boss is a bad idea? Mary is about to find out. We conclude with the final episode of the series aptly titled “The Last Show” (season seven), changes come to WJM-TV and Mary ends the series in one of TV’s most famous final scenes. The complete MeTV Remembers Mary Tyler Moore schedule is included below. Viewers can see the full MeTV schedule and find out where to watch on the SCHEDULE tab of www.wbbz.tv

“Mary Tyler Moore truly made the world smile. She was a comedy genius and an important role model for so many women. She truly will always be timeless and memorable”, said Neal Sabin, Vice Chairman of Weigel Broadcasting. 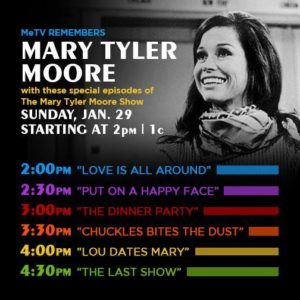 Phil Arno, owner of WBBZ-TV commented, “Mary Tyler Moore was one of the brightest stars of our generation, who entertained and inspired audiences across the world. Everyone at WBBZ-TV mourns her passing, and extends our sympathies to her family and fans.”

Mary Tyler Moore first gained TV sitcom fame in the 1960’s TV series The Dick Van Dyke Show before gaining TV superstardom with her 1970’s series Mary Tyler Moore. Playing single career woman Mary Richards, her show is seen as the benchmark of the women’s movement for its serious depiction of working women at a time when television typically depicted them as housewives and secretaries. The series also starred Ed Asner, Betty White and Valerie Harper. Moore produced the show with her second husband Grant Tinker. The show was a critical hit, earning the Emmy Award for Outstanding Comedy Series three years (1975, ‘76, ‘77), as well as Mary Tyler Moore being named Outstanding Lead Actress in a Comedy Series three years (1973, ‘74, ‘76). In all Mary Tyler Moore earned 29 Emmy Awards and 3 Golden Globes during its run. In 1977 the show was honored with the Peabody Award, which noted the series “established the benchmark by which all situation comedies must be judged.” 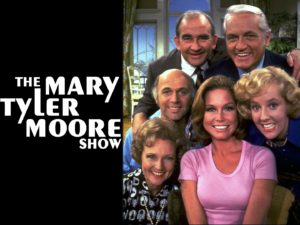 Moore has also appeared in The Bob Newhart Show, Taxi, Hill Street Blues, Remington Steele, Cheers, Rhoda, Phyllis and The Lou Grant Show. She was also nominated for an Academy Award for her performance in the movie Ordinary People.