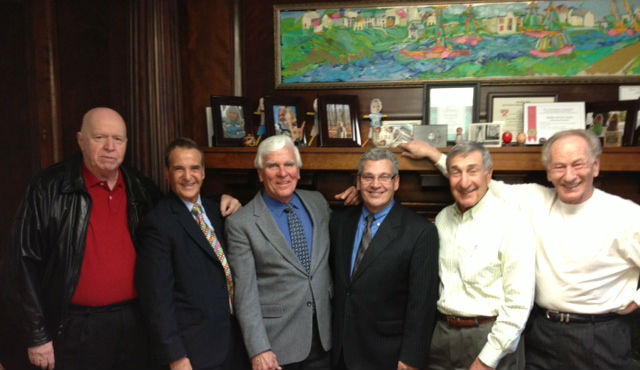 Bob Koshinski, Vice President and General Manager of WBBZ-TV, Your Hometown Television Station, is proud to announce the special telecast of “Giants of Buffalo: Radio” will air again Wednesday and Thursday nights May 21st & 22nd as part of "Giants of Buffalo Broadcasting Week" on WBBZ-TV.

John Di Sciullo, Director of Promotion and Production for WBBZ-TV was the MC. The personalities share incredible stories about their careers in broadcasting, fans, family, and the industry.

“These men influenced my choice to go into broadcasting and make it my career.  I was proud to be a part of this presentation,” WBBZ-TV GM Bob Koshinski said.

Phil Arno, owner of WBBZ-TV commented, “These men made major contributions to the medium of radio, and also television, not only in Buffalo but across the country.  I am proud our station was a partner in this historic gathering of broadcasters.”

“The Buffalo History Museum’s mission is to present a wide array of programs, exhibits, tours, and outdoor events that tell the stories of both ordinary and extraordinary people of Western New York.  Our “Giants of Buffalo’ program, with the strong support of WBBZ-TV, assists us in presenting the latter,” commented Constance Caldwell from the Buffalo History Museum.

WBBZ-TV is a proud supporter of the Buffalo History Museum, and the Buffalo Broadcasters Association.  More information on these organizations, including how you can become a member, can be found at www.buffalohistory.org and www.buffalobroadcasters.com.

Every Hometown Voice Is Heard On “Political Buzz”