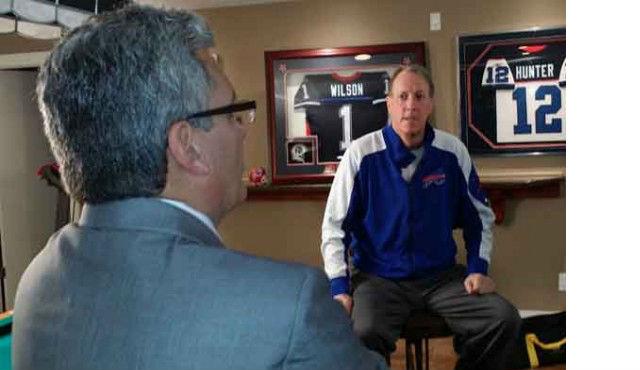 CLARENCE, NY ( www.wbbz.tv) As Buffalo Bills Hall of Fame quarterback Jim Kelly returned home to continue his battle with mouth cancer, he took time Wednesday to meet with WBBZ-TV Vice President and General Manager Bob Koshinski for a television interview to update everyone in Western New York, and across #BillsNation on his health, family, and involvement with NFL Commissioner Roger Goodell on the sale of the Buffalo Bills.

WBBZ-TV is Western New York's Hometown Television Station, and is making clips of this interview available to media outlets in our hometown, and across the country through an FTP internet distribution site, and the wbbz tv YouTube channel.   Dan Kelly, Chairman of the Kelly For Kids Foundation, is releasing this information to news media also, in association with the station.

Here is a clip from the WBBZ-TV Channel on YouTube:

During the one-on-one interview, Kelly talked with Bob about the pain he has endured in this second battle with cancer, saying "I've been better."  However he passionately declared, "I will beat this."

When talking about the support of his wife Jill and their family, Kelly emotionally paused for a moment. He reflected on the immense faith his family has, and thanked the community for their outpouring of support and #PrayersForJK.

On the sale of the Buffalo Bills, Kelly respectfully acknowledged the passing of owner Ralph Wilson stating, "Now the time is right for the fans."   Kelly has been working for several years behind the scenes to assemble an ownership group that would keep the Buffalo Bills in Buffalo.

He discussed that his conversations with NFL Commissioner Roger Goodell indicate he wants to keep the team in Western New York.

Bob Koshinski has had a long time professional relationship with Jim Kelly, going back to 1986 when Bob covered Jim's arrival in Western New York for WKBW-TV.  That relationship continued when Bob co-hosted "The Jim Kelly Show" on Channel 7, covering the team during the Super Bowl years.

However, after Bob became Vice President and General Manager of the Empire Sports Network, their connection became much more personal when Jim joined Bob to help create the Ilio DiPaolo Scholarship Fund in memory of the late pro-wrestler, restaurant owner, and community leader.