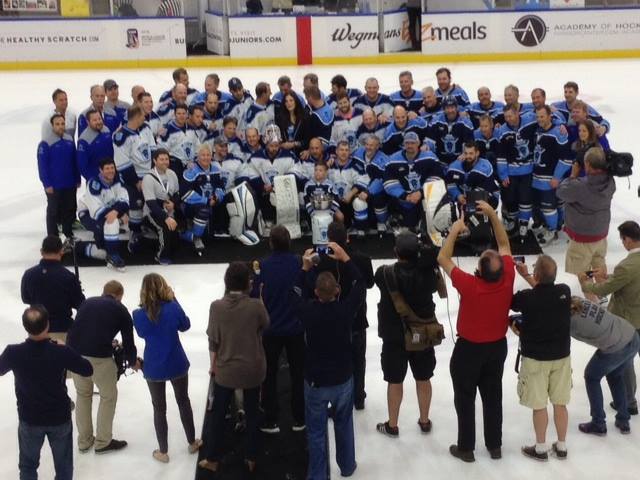 WBBZ-TV, Your Official Station of Summer MeTV Fun congratulates the teams who played in the “11 Day Power Play” – breaking the world record for the World’s Longest Hockey Game at the HarborCenter in downtown Buffalo.
The station was proud to support our friend Dave “DJ” Jickster from 97 Rock, and all the volunteers who staged this event.
WBBZ-TV joins our partner Chef’s Restaurant in that salute!
Chef’s Restaurant of Buffalo owners Louis J. Billittier, Jr., and Mary Beth Billittier-Darling congratulate the “11 Day Power Play” teams, volunteers, and organizers Amy and Mike Lesakowski on setting the record for the “World’s Longest Hockey Game” – raising $1.2 million for Roswell Park Cancer Institute and cancer research. 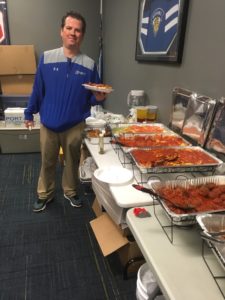 Chef’s was one of several hometown restaurants that fed over 40 people, from Thursday June 22nd through Sunday July 2nd at the HarborCenter. Chef’s World Famous Sauce was served along with pasta, chicken, salads, homemade bread, with food from the banquet and restaurant menu. 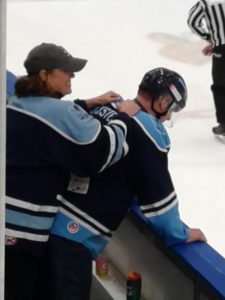 Billittier commented, “We have always been hockey fans, but this was more than a game. The spirit of this event meant so much to everyone involved. Cancer has touched all of our lives, including many in our family. Helping Amy, Mike, our friend Dave Jickster from 97 Rock, plus all the players and volunteers was something we had to do.” 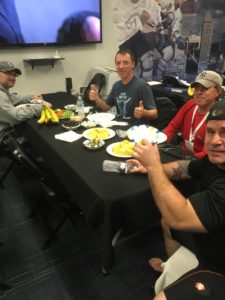 Now, Chef’s will be catering the production team of the movie “Cold Brook,” directed and starring Cheektowaga native William Fichtner. Billittier notes that food for the crew and cast presents a new challenge as more specialty salads, and seafood are served alongside the more traditional restaurant fare. 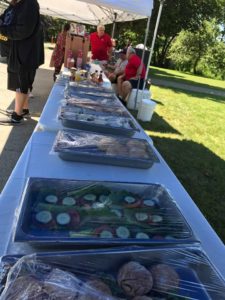 Fichtner visits Chef’s on his many trips back to Western New York. During several of those visits, he would discuss the upcoming movie project with Lou and Buffalo Film Commission leader Tim Clark over pasta. Billittier felt it was a natural for the restaurant team to lend support to the independent movie project that is putting our area on the big screen, supporting local actors and crew. Lou notes that Fichtner and actor Kim Coates will help the Louis J. Billittier Foundation in future charitable events.

Chef’s Restaurant of Buffalo is located at 291 Seneca Street ( at the corner of Chicago ) in downtown Buffalo. For over 90 years, Chef’s has been recognized as Western New York’s most popular Italian restaurant. Since the 1950’s, generations of the Billittier Family have owned and operated Chef’s. Chef’s also offers their World Famous Sauce in jars, available in several flavors at supermarkets across WNY. Owners Mary Beth Billittier-Darling and Lou Billittier, Jr. have been recognized for their philanthropy, supporting dozens of hometown charities.
Chef’s Restaurant of Buffalo, NY on Facebook / 716-856-9187 / www.ilovechefs.com / @ChefsBuffalo