Bills RB C.J. Spiller appeared on the debut of “The Fred Jackson Show” on WBBZ-TV! 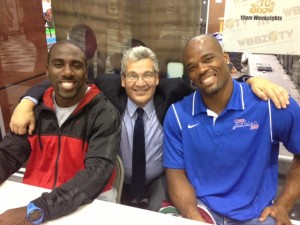 During the program, C.J. Spiller told Fred and Bob that he felt like he wasn’t on his game and that he could have tried harder.  Fred discussed how he and C.J. work together on the field, and off to meet their goals.  Fred said he felt he played better and even offered that he put on some weight during the off season.  Fred was plagued with injuries last season, and said he looks forward to winning with a new quarterback and coach.

Fred, star running back for the Buffalo Bills, has been a member of the team since 2007.

Bills running back C.J. Spiller played college football for Clemson University and was recognized as an All-American. The Buffalo Bills drafted him as the ninth overall pick in the 2010 NFL Draft.

Media are invited to use a clip on-air or online from the encore presentations, with a credit to WBBZ-TV.

Bob Koshinski on www.allsportswny.com reports that the team appeared to seize momentum late in the first half, continuing with the opening possession in the second half.  The Bills went on their longest drive of the game marching 80 years on 11 plays.  Fred Jackson was instrumental on the drive rushing 17 yards on four carries, with a key 11-yard reception on 3rd-and-5 at the Patriots’ 31 to set up 1st-and-10 at the 21 yard line.  After a three-yard carry by Spiller, quarterback EJ Manuel found Stevie Johnson for the touchdown.  C.J. Spiller and Fred Jackson combined for 108 years on 30 carries.

On returning for a second year with his show, Fred Jackson commented, “I’m excited to return to the football field and to television for another great season. This year we will have even more fun with the guest players, and have some special surprises.   I appreciate the support of all our fans.”

Fred Jackson became the first player in NFL history to rush for more than 1,000 yards and total more than 1,000 kickoff return yards in the same season in 2009.  Fred was chosen as the 2010 winner of the Buffalo Bills/NFL Walter Payton “Man of the Year” award, as voted on by selected members of the WNY community.  The award was given to Fred for a combination of his excellent play on-the-field, and his contributions to the community.

The Canisius Crusaders and Clarence Red Devils were in the audience for the debut show.

Koshinski commented, “I am very excited that Fred is back with his show on WBBZ-TV.  Fred is a true talent on the field, and on-the-air.  Fred’s show not only offers viewers a unique perspective on the game, but also the opportunity to get to know the players up close and personal.  We will also introduce our “Hotshot Football Challenge” for members of our studio audience to challenge Fred and our guest player of the week.”

WBBZ-TV owner Phil Arno stated, “Having Fred Jackson return to our lineup indicates the continued commitment of WBBZ-TV to present local programming.  We are proud to be the broadcast home of the NFL Network game when the Buffalo Bills take on the Cleveland Browns Thursday October 3rd.   Having the Fred Jackson show compliments the coverage of our hometown team.”

Jackson is a native of Fort Worth, Texas and a graduate of Coe College.  He is married with three children, and one on the way!