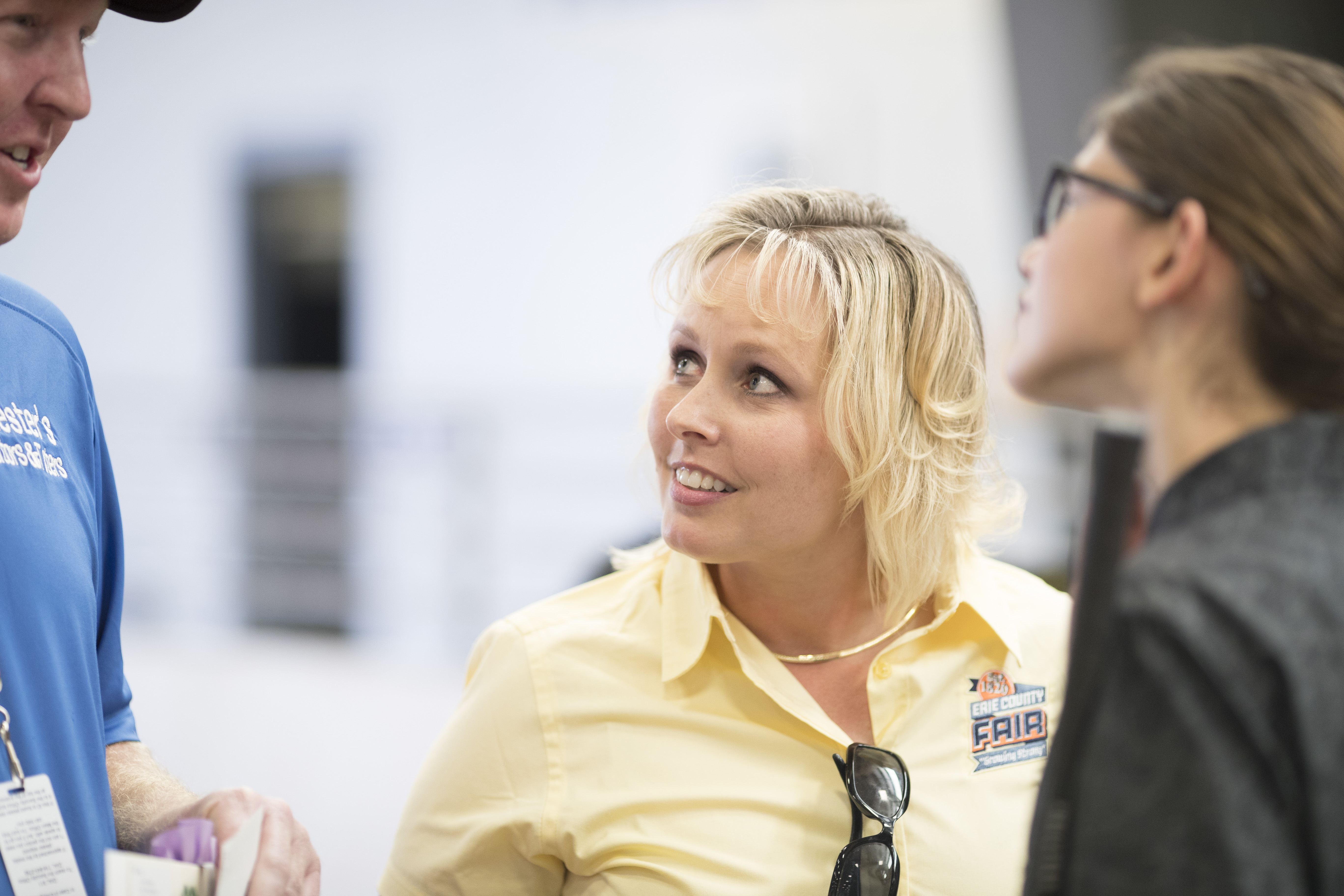 HAMBURG, NEW YORK – The Erie County Agricultural Society (ECAS), sponsors of the Erie County Fair, has named Jessica Underberg as its new Chief Executive Officer & Fair Manager effective October 1, 2017. Underberg, who has served as Assistant Fair Manager since 2010, will succeed current CEO Dennis R. Lang. Lang will retire at the end of September after 18 years of service to the organization.

Underberg will be responsible for all aspects of the 12-month operations of the 270-acre Erie County Fairgrounds. She will lead activities related to the annual Erie County Fair, all non-fair events and oversee 50 full-time, 15 part-time and over 750 seasonal employees. She brings extensive experience in both the fair and the animal agriculture industries to the position.

“The organization will be in extremely good hands,” said Dennis Lang. “Jessica has been, in one way or another, a key part of all aspects of the operations of the Fairgrounds since she joined us over 20 years ago. There is no one as passionate as Jessica about the Fair and our agricultural mission. I am confident in her abilities to lead during this time of dramatic change taking place in our industry.”

Her involvement in the Erie County Fair began in 1985 while participating in various exhibits in the Fair’s Youth Development Building. In 1988 she showed 4-H Beef Cattle at the Fair for the first time and continued to show 4-H beef cattle, hogs and dairy cattle through 1995. Her goal focused 4-H experiences gave her an opportunity to develop initial leadership and public speaking skills. In 1992 Underberg won the Fair’s Master Beef Showman title, an accomplishment that still evokes tremendous personal pride.

Underberg began working for the ECAS in 1996 when she began working part-time in the Fair’s Administrative Office. Following graduation from Canisius College in 1998, where she earned a Bachelor of Science Degree in Social Sciences, she joined the Society full-time. After a brief opportunity working at the Yale School of Management in New Haven, Connecticut, she rejoined the Fair as the Executive Assistant to CEO & Fair Manager Dennis Lang. In 2000 she was named the Fair’s Agriculture and Competitive Exhibits Manager.

During Underberg’s tenure as Agricultural Manager, she drew deep into her own agriculture background having grown up on a family dairy farm in nearby Collins, New York. In 1999 she created the Fair’s AgSperience exhibit to bring fairgoers closer to farmers, their animals and crops. The success of this program resulted to the development and construction of the Agricultural Discovery Center in 2014. In 2010 she created the award winning Farm 2 Table educational program with the goal to teach students about the importance of agriculture in their lives, reinforce healthy nutrition and to engage their natural curiosity through a multimodal approach. Since its inception, 36,776 students have attended various Farm 2 Table programs.

She actively participates in a network of professionals among national and international fair associations. In 2007, Jessica earned her Certified Fair Executive status from the International Association of Fairs and Expositions (IAFE). She has served on various IAFE committees and has been elected to numerous leadership posts including being the IAFE’s Board of Directors Zone 1 Representative from 2014 to 2016. In 2017 she was elected to serve as the IAFE’s Second Vice Chair. She will become Chairperson of the IAFE in 2019. In 2008 Underberg was on a team that helped develop the IAFE’s Young Professionals Initiative as a way to encourage a new generation of leadership among fairs across the world.

She is a member of the New York State Association of Agricultural Fairs where she served as the organization’s President in 2010-2011 and was on the Board of Directors of the Cornell Cooperative Extension from 2009 to 2011. She represented the Erie County Fair at the Royal Agricultural Society of the Commonwealth’s conferences in Edinburgh, Scotland in 2010 and Brisbane, Australia in 2014. She is a member of Buffalo’s Business First “40 under 40” class of 2014.

Underberg credits outgoing CEO Denny Lang for providing her the opportunities to grow as a person, a professional and to develop as a leader.

“He believed in me when I didn’t believe in myself.  He pushed me to grow and learn. He gave me responsibilities in the Fair’s Agricultural & Competitive Exhibits Department that were not normally given to a 20 year old.”

Underberg resides in Springville, New York with her husband Mark and her two daughters Lilly and Ella. She is a 1994 graduate of Springville-Griffith Institute.