Watch as Theo, Zelda, and Bird present the good, the bad, and the foreign every Saturday night at Midnight on WBBZ-TV!

This week, we find out that two heads are better one when we present “The Manster!”

The Manster (双頭の殺人鬼, “The Two-Headed Killer”) is an American science-fiction horror film. Shot in Japan, it was produced by George P. Breakston and directed by Breakston and Kenneth G. Crane from a screenplay by Walter J. Sheldon. Sheldon’s script was based on Breakston’s story which he originally titled The Split[1] [2].

The film starred Peter Dyneley as a foreign correspondent in Japan who is given an experimental drug which causes an eye and eventually, a second head to grow from his shoulder. Tetsu Nakamura played the mad scientist, Dr. Suzuki, with Tamoko Takechi as his horribly mutated wife, Emiko

Plus, watch the next episode of “Why I Murdered My Roomate” – a Buffalo made mini-movie!

“Off Beat Cinema” began as a local program Halloween weekend 1993 with the broadcast of the late George Romero’s “Night Of The Living Dead” on Buffalo’s WKBW-TV. After a few years gaining a local cult following, the program went national in January 1997. The project moved to independent station WBBZ-TV in August of 2012. Currently, “Off Beat Cinema” is broadcast Saturday at midnight on WBBZ-MeTV; WGBT-MyTV in Rochester; in Corning/Elmira on WJKP-MeTV at Midnight, then again at 2am on WYDC-TV BIG FOX in the Twin Tiers; and Saturday night at 10p.m. (Eastern) on the Retro Television Network of stations across the country. “Off Beat Cinema” is one of the longest running television shows to be syndicated out of Buffalo.

The background music for the show is performed by local musicians David Kane’s Them Jazzbeards. The program consistently supports Western New York musicians, artists, filmmakers, and organizations, giving them exposure on a national platform.

“Off Beat Cinema” delivers the good, the bad, and the foreign, showcasing campy sci-fi classics as diverse as “Teenagers from Outer Space” to classic “art films” such as “Rashomon”; with silent film greats like Charlie Chaplin’s “The Gold Rush.”

Moving forward “Off Beat Cinema” is looking to host a film festival event at an area theater; more remote telecasts from Comicon’s and Western New York destinations shot in HD; and continuing to post programs on digital platforms. 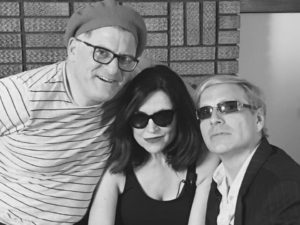