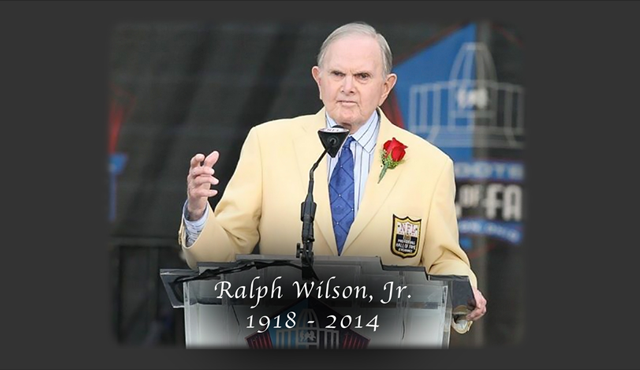 A celebration and remembrance of the life and legacy of Ralph C. Wilson, Jr. will be held in the Buffalo Bills Fieldhouse on Saturday, April 5 from 1:00 p.m. – 4:00 p.m. for fans across the region.

The celebration and remembrance will feature memorabilia, exhibits, and a guestbook for fans to share their respects and pay tribute to Hall of Fame Owner, Ralph C. Wilson, Jr.

Fans interested in making a donation in honor of Mr. Wilson’s memory are encouraged to do so to:  The Hospice Foundation of Western New York, The Alzheimer’s Association Greater Michigan Chapter and to St. John Hospital Medical Center in support of the Wilson Telemonitoring Program.

Ralph C. Wilson, Jr. passed away recently at the age of 95.  He was the owner of the Buffalo Bills.

“I speak for everyone within the Bills organization when I say that we are all suffering a deep and profound sadness with the passing of our Hall of Fame owner Mr. Wilson," said Bills CEO and President Russ Brandon. "We have lost our founder, our mentor, our friend, and this is a very difficult time for us all. We extend our deepest sympathies to his wife Mary, his daughters Christy and Dee Dee (Edith), his niece Mary and his entire family.

"Mr. Wilson had a relentless passion, a deep love for his Buffalo Bills, the City of Buffalo and the National Football League.  He also loved the Bills fans and all of the people of Western New York who embraced the Bills.

You can read the full statement, with more on Mr. Wilson by clicking this link: http://www.buffalobills.com/news/article-1/Statement-on-the-passing-of-owner-Ralph-C-Wilson-Jr-/af2d21b5-0053-448d-a04c-626f761487a6?campaign=splash_buf_article

Bob Koshinski, VP & GM of WBBZ-TV reports on his "All Sports WNY" website that these are trying times for Bills fans, not only with the passing of Mr. Wilson, but also with the community rallying around Jim Kelly as he battles cancer.

With the passing of Buffalo Bills owner Ralph Wilson and the battle against cancer being waged by Jim Kelly these are trying times for the collective Bills family.

Ralph Wilson’s contributions to Western New York will now be truly appreciated. Such is the way of the world. Men are often honored more by death than by life.

Wilson and Kelly forged a strong personal relationship over the years. Jim had an insiders view to Ralph Wilson that most could not share. Ralph Wilson had been very good to Jim over their many years, both as a player and as a man. Jim has shared some of that over the years and I know that has been one of the reasons why coming to Buffalo ended up being a blessing for Kelly.

You can read more by clicking this link: http://www.allsportswny.com/trying-time-buffalo-bills-family/

But what is next for our hometown team?  How will ownership change?  While the community prepares to say goodbye to Mr. Wilson both in Buffalo and Detroit, those questions will soon emerge.

Buffalo News sports columnists Bucky Gleason and Jerry Sullivan will pick up that part of the story, with commentary on the legacy of Mr. Wilson and the future of the team.  "The Bucky and Sully Show" airs every Monday and Friday night at 6:30p.m. ( encore Sunday 11:30a.m. ).

For more on his life and legacy, log on to www.allsportswny.com