Legendary WKBW-TV Eyewitness News anchor Irv Weinstein has passed away. WBBZ-TV joins everyone in our hometown in remembering this iconic broadcaster and supporter of Western New York.

Phil Arno, owner of WBBZ-TV and the entire Hometown MeTV Station team extends their sympathies to the family of Irv Weinstein, his friends, and legions of fans on his passing.

The 87 year old former anchor of Channel 7’s “Eyewitness News” was iconic in Buffalo as part of the longest running, and most popular television news anchor team in broadcast history.

In honor of Irv’s passing, WBBZ-TV will re-broadcast two half hour “Giants of Buffalo Broadcasting” specials Wednesday and Thursday evening at 8p.m. Phil Arno and John Di Sciullo interview retired sports anchor Rick Azar, weather anchor Tom Jolls, and news icon Irv Weinstein about their careers, and lives off screen. The trio were in Buffalo in March of 2014 at the invitation of the Buffalo History Museum for a “Giants of Buffalo” event. Di Sciullo worked with Weinstein from 1983 until his retirement in 1998 when he was a programming executive at WKBW.

In addition, Buffalo storyteller Steve Cichon will be a special guest on the Friday edition of “Daily Buzz 716” – LIVE at 10a.m. – to share his memories of Irv. Cichon wrote a book about Irv several years ago that is full of photos and stories.

For more on the passing of this legend, go to www.wkbw.com for more video clips. Post your memories of Irv on our Facebook page, and @WBBZ on Twitter. 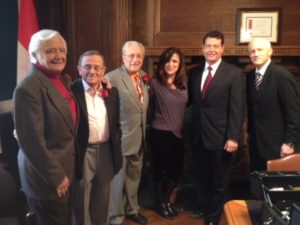