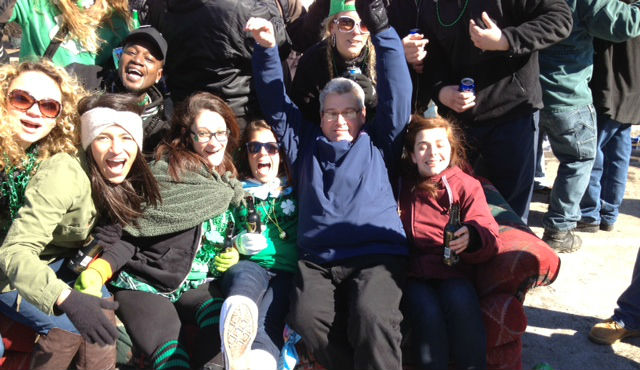 WBBZ-TV cameras were rolling throughout the parade. Look for coverage on "All Sports WNY," "Political Buzz," station promotional announcements, website www.wbbz.tv, and on our social media Facebook and Twitter pages. Check out the photo gallery!

Our own Bob Koshinski got to sit on the celebrity "couch" – flanked by fans – along the parade route!

The United Irish Association of Buffalo stages one of the largest St. Patrick's Day parades in the nation, with a single mission: To conduct a great religious, patriotic, and civic event in Buffalo that honors Saint Patrick and displays the Irish contributions to our community and country.

Despite the winter chill, hearts were warm as tens of thousands of Western New Yorker's marched and reveled in the annual event.

The parade kicked off at 2p.m. sharp from Niagara Square, marching north on Delaware Avenue to North Street.

The Grand Marshall of the 2014 Parade was Chris Laffler. The lifelong Tonawanda resident is a customer account manager for General Mills, and was proud to support the "Lucky Charms" float, celebrating that the popular cereal with an Irish theme is made here in Buffalo. He was joined by his wife Christine and their two sons Brendan and Connor as his deputy marshals, along with his longtime friend Gary Johnston, President of UIAA. Laffler has worked to help organize the parade and related activities for many years.

The day began with a Mass at St. Joseph's Cathedral led by the Bishop of Buffalo, Richard J. Malone, who also help lead the parade with area dignitaries. The 2014 parade was dedicated to the late Margaretmary "Peggy" (Roberts) Dobmeier, of the John Roberts Funeral Home. Peggy’s husband Robert Dobmeier along with their three children Mary, Anne and Robert will lead a large contingent including Peggy’s brothers John, Michael and James Roberts and sister Jacqueline DiMaggio, along with family and friends in Peggy’s memory in this year's parade.

WBBZ-TV was proud to be surrounded by some of our hometown partners, including the West Side Rowing Club, and the Boy Scouts of Buffalo. Our station is proud to support these organizations, and see them at the parade.

Other famous faces caught by our hometown cameras included Mayor Byron Brown, who wished everyone a happy and safe Saint Patrick's Day. Watch for his interview on WBBZ-TV. He was joined by Buffalo Public Works Director Steve Stepniak, who talked about the challenge of clearing Delaware Avenue of all the snow after the recent blizzard.

Congressman Brian Higgins caught up with our cameras, and talked about what a true family gathering of Irish Americans the parade is for all of Western New York.

Buffalo News Managing Editor Brian Connolly, also the Executive in charge of our "Bucky and Sully Show," was on hand with his daughter – who was dancing with one of the many Irish dance organizations.

Those dance organizations were in full costume, and danced their way up Delaware Avenue.

Congratulations to the Buffalo Police Department, Buffalo Fire Department, and Public Works Division, for clearing the way and maintaining order for the event.