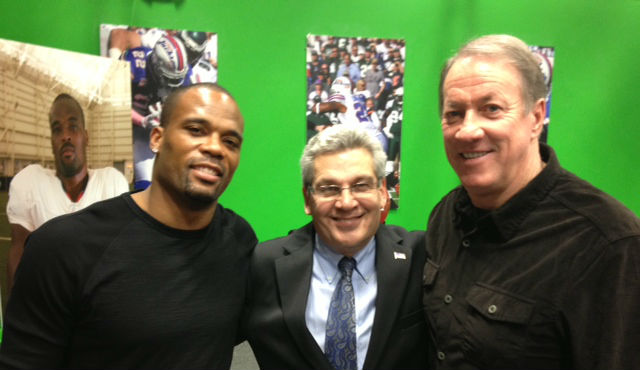 Kelly talked about current quarterback E.J. Manuel, telling Bob and Fred he wonders if he was still at Florida State sometimes. He went on to say he liked some of what he saw, and that Manuel has leadership ability – but needs a full season to prove himself.

Kelly also showcased a new product he is working on called "Fan Clips" that can keep everything in order from money to munchies. You can find out more at his website: www.jimkelly.com.

A full studio audience enjoyed the show, and was able to secure autographs from the superstars after the program. There is one more "Fred Jackson Show" to go- which will air TUESDAY January 7th at 7:30pm LIVE ( not on Monday as originally scheduled due to a conflict with Fred ).

When it was time for the HOTSHOT FOOTBALL CHALLNGE, Fred and Jim competed with members of the studio audience for prizes – and quarterback Jim Kelly won!

After the show, UB BULLS quarterback Joe Licata and his father Gil stopped by to say hello to Jim and Fred, and get some photos. The UB Bulls had a great season this year as well.

Kelly was quarterback for the Buffalo Bills from 1986-1996 and led the team to four consecutive Super Bowls from 1991 to 1994. After his playing years, Kelly and his wife Jill have led The Hunter's Hope Foundation in honor of their late son Hunter, who was diagnosed with Krabbe Leukodystrophy, an inherited fatal nervous system disease. The Kelly's have worked to fund research and bring encouragement and hope to families in the midst of suffering.
Besides playing for the Bills, what else do Kelly and Jackson have in common?
Marv Levy.
Marv was coach of the Bills during Kelly's years with the team.  In 2006 when Levy had briefly returned as General Manager, he invited Fred Jackson to training camp and become a Buffalo Bill.  Prior to that, Fred Jackson was playing with the Sioux City Bandits in the National Indoor Football League.
Jackson and Levy were also graduates of Coe College.
Fred Jackson is having a record breaking season with the Buffalo Bills.  Last week against the Miami Dolphins Jackson had 111 rushing and seven receiving yards Sunday, besting his previous season-high.

“The General” with Buster Keaton Saturday@Midnight on “Off Beat Cinema”