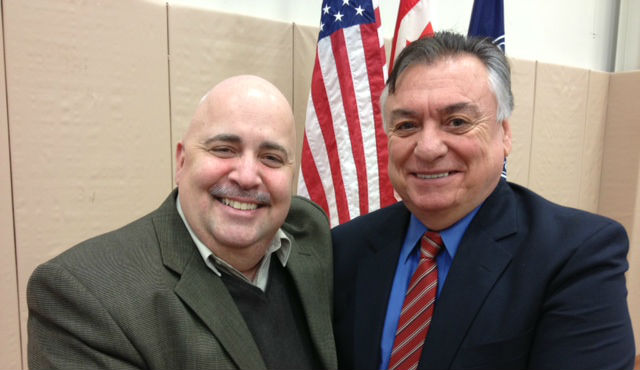 WBBZ-TV was recognized Monday March 24th as “Station of the Year” by Medaille College at their 9th annual College Media Awards lunch ceremony at the campus.

Professor Lou Pozantides welcomed Lisa Marsherall, Chair of the Department of Communication in recognizing Phil Arno with the “Television Station Of The Year” award for building a hometown media outlet, and continuing to introduce new programs and creative concepts on our growing station. The award recognizes those who have made a significant contribution to the Western New York community.

In addition to WBBZ-TV, four other media personalities and behind the scenes producers from television and radio were recognized for reporting, on-air work, and production.

Peggy Penders from the Better Business Bureau was recognized in the field of public relations.

During Phil’s acceptance speech, he noted how much this award meant as WBBZ-TV is the new station on the block, looking to continue to connect with our hometown viewers. He noted that this award was not for him, but for everyone at WBBZ-TV, thanking the team for their creativity and hard work in making the station grow.

For more information on Medaille College, you can connect at www.medaille.edu

More photos of the event can be found at the WBBZ-TV Facebook page here: Medaille College Honors Phil Arno

Thanks For Helping WBBZ-TV Raise Over $5,000 For Prevention Focus at the Erie County Fair!

Get Your Photo Taken With “Rudolph!”