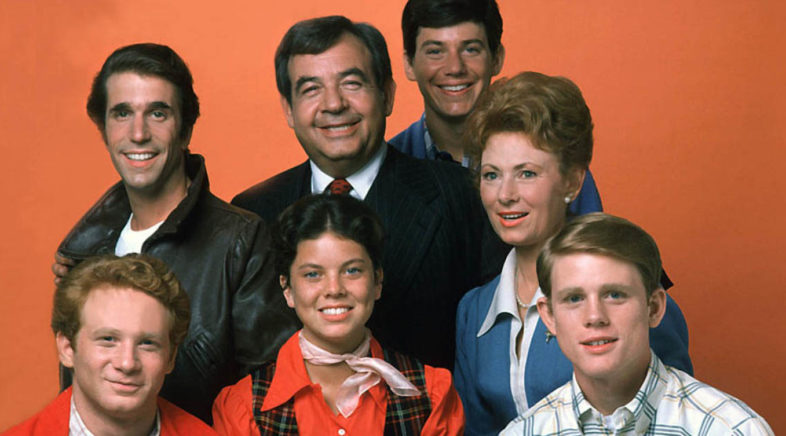 One of the most popular television shows ever returns to WBBZ-TV, Your Hometown MeTV Station – “Happy Days” is back weeknights at 6:30pm starting Monday June 1st!

Happy Days is an American sitcom television series that aired first-run from January 15, 1974 to September 24, 1984 on ABC, with a total of 255 half-hour episodes spanning eleven seasons. Created by Garry Marshall, the series was one of the most successful of the 1970s, an idealized vision of life in the mid-1950s to mid-1960s Midwestern United States, and starred Ron Howard as young Richie Cunningham, Henry Winkler as his friend Arthur “Fonzie” Fonzarelli, and Tom Bosley and Marion Ross as Richie’s parents, Howard and Marion Cunningham.[1] Happy Days became one of the biggest successes in television history and heavily influenced the television style of its time

The series began as an unsold pilot starring Howard, Ross and Anson Williams, which aired in 1972 as a segment entitled “Love and the Television Set” (later retitled “Love and the Happy Days” for syndication) on ABC’s anthology show Love, American Style. Based on the pilot, director George Lucas cast Howard as the lead in his 1973 film American Graffiti, causing ABC to take a renewed interest in the pilot. The first two seasons of Happy Days focused on the experiences and dilemmas of “innocent teenager” Richie Cunningham, his family, and his high school friends, attempting to “honestly depict a wistful look back at adolescence”.[2] Initially a moderate success, the series’ ratings began to fall during its second season, causing Marshall to retool it emphasizing broad comedy and spotlighting the previously minor character of Fonzie, a “cool” biker and high school dropout.[2] Following these changes, Happy Days became the number-one program in television in 1976–1977, Fonzie became one of the most merchandised characters of the 1970s, and Henry Winkler became a major star.[3][4] The series also spawned a number of spin-offs, including Laverne & Shirley and Mork & Mindy.