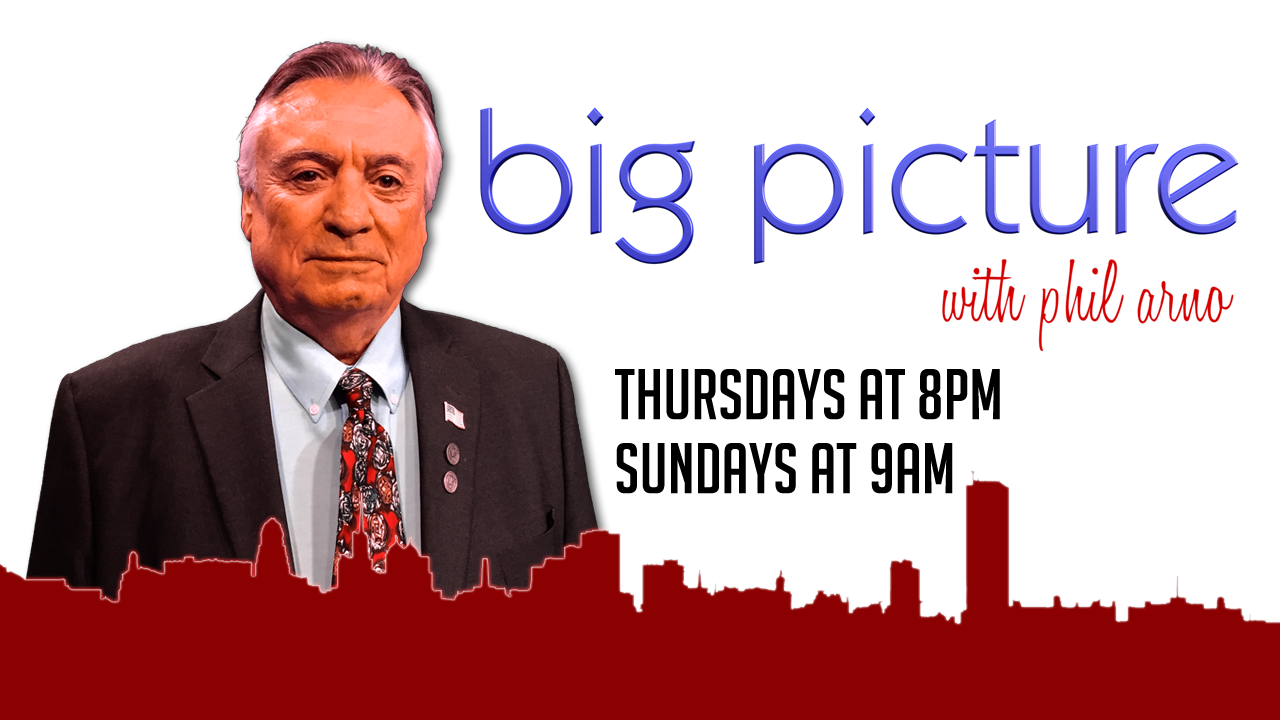 The broadcast journey of Phil Arno began as a young boy during the 1950’s in North Buffalo. He credits his first generation American parents for instilling in him a fascination and appreciation of the world around him including Hollywood, television and world events. He gained respect for the good story telling on TV of the time watching “The Untouchables”, “I Love Lucy,” “Sid Cesar’s Show Of Shows,” and others. Ironically, many of those shows Phil grew up with on are on the MeTV schedule of WBBZ-TV, the independent station Phil and his wife Mary have owned since 2010.

After graduating from Canisius High School with fellow classmate Tim Russert ( who gave Phil his sports nickname “Tiger” ), Phil went on to Canisius College. It was at this time that Phil managed to convince the legendary Jeff Kaye at WKBW to give him a shot at the radio station. Jeff saw something in young Phil. He was brought on board to manage promotions, do copywriting, and to hear Phil tell it, be one of the ringers on the KB YO YO’s Basketball team. Radio was a creative canvas Phil embraced. In 1970, while still going to Canisius College and working at KB radio, Phil signed on to work at WUTV as the station signed on the air. For the next 2 years, Phil held both jobs while attending class. The broadcasting bug had clearly taken a firm hold.

Upon graduation in 1972, Phil left Channel 29 and moved across the parking lot from WKBW radio to WKBW-TV, where News Director Irv Weinstein put a camera in Phil’s hand to shoot news film. That decision proved to be profound. As one of the six Channel 7 cameramen, he learned his craft while helping to build the “Eyewitness News” brand.

In the late 70’s, Phil began freelancing first as an independent, and then for a time at WIVB-TV news. It would be the first of two tours of duty with Channel 4, where he built lifelong friendships personally and professionally.

In 1980, the call to “Go West Young Man” was answered. It was time to explore. Phil left for Los Angeles. Phil calls these his vagabond days. He lived in a van for 6 months, wrote scripts, crashed with a friend at his apartment for a month, and then found a boat to live on for a year.

During this time he did odd jobs. He did carpentry, installed appliances, fixed cars and sold video equipment at the famous (in L.A.) Madman Muntz‘s.

Finally, Phil got a job back in broadcasting. It would be his first connection with an independent station, but not his last, at KHJ Channel 9. This powerhouse news operation was where this photographer – editor – and live truck operator, picked up his first Emmy for “The Silent Sin,” a 60 minute documentary on incest, working with talent Mike Farrell of “M*A*S*H” fame.

While in Hollywood, Phil pursued other interests in writing for scripted shows. He optioned some screenplays and had many pitch sessions for his ideas, including one about a drama inside a local TV newsroom, a reality news program, and even became a regular pitching ideas with “Star Trek” producers.

Jim Peppard asked Phil to come back to WIVB in 1985 as part of a push to return Ch 4 to number one in the market. As part of that push, Phil produced a series with Rich Newberg titled “Buffalo Goes Hollywood” which drew on Phil’s LA contacts. That February sweep series showcasing Western New York’s best in the entertainment industry contributed to “News 4” winning that week during the February sweep, the first time that had happened in 14 years.

But the coast called again, and in 1989 Phil was in Los Angeles again, working for KHJ and then Disney owned KCAL-TV.

Aside from broadcasting, Phil’s other lifelong love has been aviation. He learned to fly when he was in high school and holds a Commercial, instrument, single, and multi-engine ratings and has flown coast to coast many times. This love of aviation made Phil a natural to become renowned as the best news photographer / reporter in choppers over the Southern California. During this “Tour of Duty” in California, Phil garnered two more Emmy awards; five Golden Mic awards; the AP 1st place award for “Southland on Fire” in 1993; New York Festivals 1994 International Award for coverage of the Northridge earthquake; and the 1996 LA Photographer of the year as voted by the Greater LA Press Photographers Association.

It was during this time that Western New York native and Bills fan Phil Arno, holding on to his video camera while strapped in, was a chopper videographer that covered the infamous O.J. Simpson white Bronco chase just before the murder trial of the controversial former Buffalo football hero. His work was seen around the globe, and set the standard for helicopter coverage.

His freelance work in 1997 connected him to KABC, then KCBS where he helped design, construct, and report from Chopper 2. He won a heroism award from the County of Los Angeles for “Courage and Skill” for assisting in the emergency landing of a disabled helicopter with no loss of life.

Ironically, it was in 2000 that Arno’s life was almost lost.

In 2000, Phil was shooting the Academy Awards for KTTV when the helicopter he was flying in crashed. Here is an excerpt from the LA Times:

Suddenly, Arno recalled, the aircraft began spiraling toward the ground. “The tail was spinning around the nose,” he said. “I didn’t think we would recover from that.”

But pilot Kris Kelley righted the helicopter and guided it on a 15-mile trip back to Van Nuys Airport, escorted by two choppers from rival TV stations. Before it could land, the disabled aircraft slammed into the asphalt at the airport and burst into flames.

Kelley chose to return to her Van Nuys base after losing hydraulic pressure…Arno and Kelley were rescued from the fiery wreckage by a two-man news crew working for “Entertainment Tonight,” and an airport police officer.

As Phil describes it, his perspectives on things changed. He and his wife Mary had just welcomed their twin boys into the world, Warren and Joe. They were both just one when the crash almost claimed the life of their father. After 3 years of rehabilitation and recovery in a wheelchair and nine surgeries, Phil decided to bring his family back home to Western New York. While Mary is originally from New Orleans, and was an editor at the Los Angeles Times when they met, she quickly made Phil’s hometown her hometown.

And if you haven’t figured it out by now, the conventional pathway is still not the chosen route for Phil. Instead of simply retiring, two dramatic life decisions remained to be made.

First, he, Mary, Warren and Joe traveled to Poland where they adopted Anna who completes their family.

Next, and perhaps finally for this wondering soul, a true “David Vs. Goliath,” chapter began when Phil set out to bring local TV back to Western New York with the acquisition in 2010 of WNGS-TV- since converted to WBBZ-TV, Buffalo’s Hometown MeTV locally owned station.