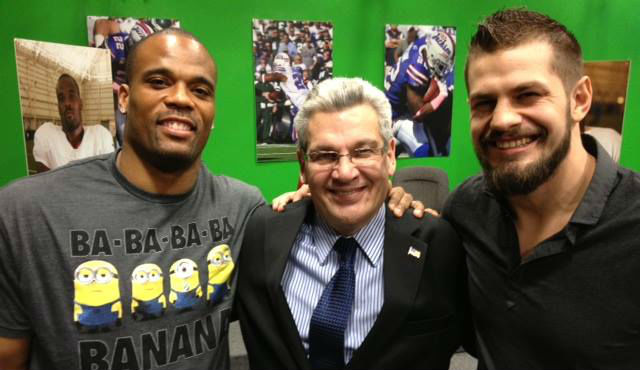 Buffalo Bills RB Fred Jackson and Sabres forward Patrick Kaleta are good friends, and it showed when they visited with host Bob Koshinski for the final "Fred Jackson Show" of the season on WBBZ-TV. These hometown sports heroes visited Your Hometown Television Station to talk about what Fred will be doing in the off season, and whether Patrick will return to the ice after sustaining an injury.

Miss the LIVE show? Catch the replay Monday night at 11pm or Tuesday at 9am.

Fred shared with Bob that he recently met television icon Regis Philbin at his FOX Sports show, and that Regis said he was "one of the best running backs in the NFL." Fred also shared that he and his fellow teamates participated in a chicken wing eating contest for a national commercial to be aired during the Super Bowl.

Kaleta, who has been sidelined with an injury, told Bob and Fred that he has met Pat La Fontaine and the new Sabres management, and hopes to be on the ice next season.

What you may not have known is that Kaleta is an avid collector of LEGO toys. We showed some video of his immense creations.

Social media guru Bradley Gelber peppered the players with "tweets," including Kaleta's thoughts on having to play in the AHL after some controversial plays with the Sabres.

In addition, we also found out that Fred and Patrick are fans of "Super Heroes" with Fred favoring the "Hulk!"

Thanks to everyone who made "The Fred Jackson Show" great this season. Fred had a stellar year on the field, and on-the air. Kudos to our crew, and to our hometown fans! Stay tuned to WBBZ-TV for more great features in the future with Fred!

Join Our Family! Become a Hometown Partner with WBBZ-TV, Your Hometown MeTV Station

“A Christmas Carol” On Stage Now At Alleyway Theatre in Buffalo!