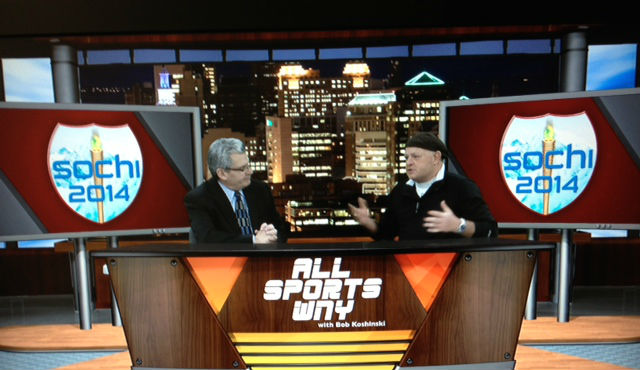 Sabres legend Danny Gare is on "All Sports WNY" with Bob Koshinski.  Get his take on the Olympic hockey matchups, the Sabres, and his work with the Buffalo Sabres Foundation and Buffalo Hearing and Speech Foundation.

What does Danny think of NHL players breaking to play in the Olympics?  Plus, where does he think the Olympic teams rank?

You can also connect with Bob's reports online at www.allsportswny.com.

During a 14-year professional career, Gare also played for the Detroit Red Wings and Edmonton Oilers. He was a two-time All-Star right winger who twice scored 50 goals for the Buffalo Sabres, including the 1979–80 season, when he tied for the league lead with 56. He was known for his quick wrist shot and status as a small, yet scrappy and fearless players.

Following his playing career, Gare was briefly an assistant coach for the Tampa Bay Lightning, and served on the Buffalo Sabres broadcast team on Empire Sports Network. He served as color analyst for the Columbus Blue Jackets under FSN Ohio from 2006 until April 2009.  He also served as an interim studio analyst for the Buffalo Sabres when Mike Robitaille has been unavailable and did color commentary for games that Harry Neale was unable to work.He was appointed the alternate Sabres color analyst and paired with Kevin Sylvester in an effort to reduce the workload of longtime Sabres broadcaster Rick Jeanneret. Gare and Sylvester call the majority of the road games and a few home games.

Gare was inducted into the Buffalo Sabres Hall of Fame in 1994. On November 22, 2005, Gare had his number 18 jersey retired by the Buffalo Sabres. He is the fifth player of six total so honored. Because of his goal scoring prowess he played right wing on the power play even during The French Connection years, which pushed René Robert back to the point. He holds team records for most goals by a right winger (267), most game-tying goals (21), and fastest goal scored from start of NHL career (:18 into a game versus the Boston Bruins on 10 October 1974).